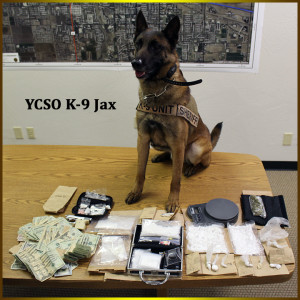 SAN LUIS, Ariz. – A man was arrested after a narcotics task force served a search warrant and found numerous drugs at a house.

Felix was booked into the Yuma County Detention Center and is facing a list of drug and firearm charges.

Eduardo Santiago joined the FOX 9 and ABC 5 news team in February, 2012. That’s the same year KECY launched its very first local newscast. He has been covering local news in Yuma and the Imperial Valley since his start as a KYMA photojournalist in 2006. During his decade in broadcasting, Eduardo has covered some of the biggest stories in the Desert Southwest – from President Bush’s visit to Yuma, Ariz. to the uncovering of drug tunnels that span the US-Mexico border. One of the most memorable stories Eduardo covered was the 2010 Easter Earthquake that rocked the Imperial Valley, Mexicali, and Yuma. Eduardo, along with his news team, won an award from the Associated Press for best coverage of an ongoing story following the quake. Before he made his move to TV, Eduardo was just a kid born in East Los Angeles, where he spent his early childhood. His parents moved him to Mexicali, B.C. Mexico, where he did most of his elementary school education. He finally landed in El Centro, where he graduated from Central Union High School in 2005. Eduardo is currently a student at Imperial Valley College. You can find Eduardo hanging out in the Imperial Valley and Yuma with his family on any given weekend. His off-screen passion is playing guitar and sports.

Most Popular
Most Recent
Random